Last September I mused about the concept of what I call Ambient NPC populations, I spent a lot of time researching (read playing) certain games that have what I call an ambient NPC population. This is specifically those NPC's that reside in the background and generally have no real or very limited interaction with the player, but may have some limited interaction with each other or the surroundings.

I felt a new approach would be needed to sort through what was and was not required to achieve a similar environment in LE, I decided first to create the environment and to then set about, at different levels, adding in the ambient NPC population, the thought behind this was it would be easier to visualise what I wanted to see taking place, if it took place ... in place ... not the best description but I hope you will understand what I mean.

So the first step is to create a small village environment and then to start adding in the population. 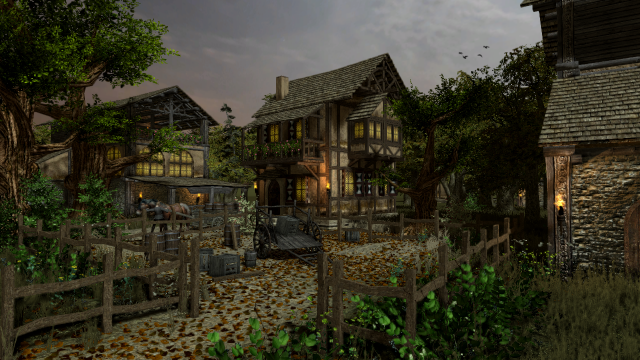 The important thing with this small test village level will be the roads/paths, as the first tier of the population will basically be simple "walkers".

Even now, I am still formulating the different types required from "walkers" to simple "static actors" and how to implement some of those types to have different interaction levels. I will be utilising several different methods to allow the NPC's to navigate Swanwyck, from a simple "follow node" approach to predefined path data and on the fly A* navigation.

I did have some very good results with A* pathfinding already, which can be read about here:

Hopefully I can find the time to get "Swanwyck" up to a usable standard, and get the first tier of the "walking" population up and running.