After deciding to extend upon simple tower-defense monster interactions,  I decided that I wanted to take the mechanics a step further. Actually have my mobs respond to an ever changing enviroment. As with some tower defense games, the player is able to construct obstacles within the playfield to alter pathing and in general make it 'harder' on the mobs to reach their destination.

Enter the Wizard, our main player controlled character. By selecting a wizard I've been able to open doors to many possibilites that normally wouldn't 'fit' in this scenario, after all -  a wizard is based on magical/fantasy possibilites so theres not a lot of explaining required. I can litterally dream up any type of abiility and it won't seem 'so far' out of place.

This brings me to the first ability I've given the wizard, it's a simple concept but one that can be played out from the begining to the end of each challenge map. And that ability is 'Summon Crate'.  yes ! very simple but will eventually have a major roll in the outcome of winning a maps challenge.

The crates yield to the laws of physics giving them a real-feel-like place in the world.   Summoning and placing crates around the map allows the player to block and alter the paths the eneimes would have took to reach their objective(s).

Further more I plan to expand upon the Summon Crate ability to allow for barrels, which could be used to roll down hillsides and smash into the critters below.  I've already began scripting the 'Summon Haystack' skill - which in turn allows the player to place a stack of hay on the playfield ( preferably in the path of oncoming eneimes ) and then set it ablaze, jump back and watch the fireworks as enimes in the path of the burning hay start taking damage.  It's unclear to me thus far - just how far I want to take the enemy AI. Ultimately the AI would detect the burning fire in front of the mob and plan a detour around it - but then again this would defeat the purpose of even having burning hay as the player could easily revert back to the original Summon Crate ability for the same effect.

As time goes on and I further the AI abilities I'm certain it'll become more clear to me as to what extents I wish to push the AI in this defense game. 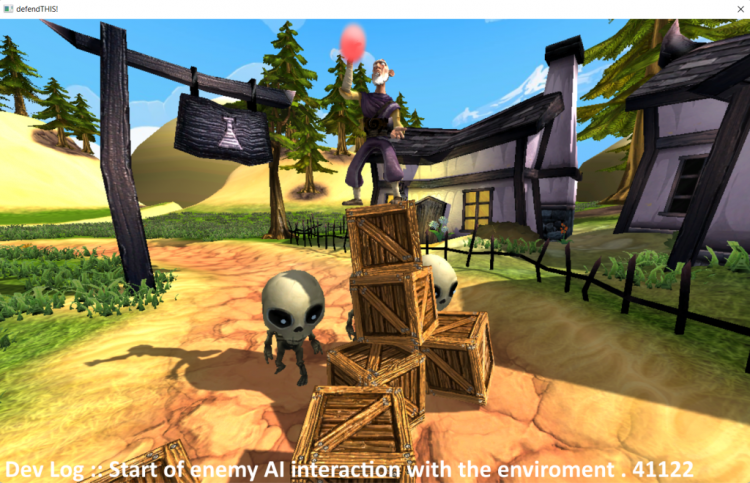