You probably have noticed that our entire community has been migrated from the leadwerks.com domain to our new ultraengine.com domain. In this article I am going to describe recent changes to our website, the process by which these decisions were made, and the expected outcomes. These are not just superficial changes, but rather it is a fundamental restructuring of the way our business works. This is the execution of a plan I have had for several years.

When we first starting selling on Steam and I saw the revenue it was bringing in, my reaction was to focus entirely on Steam and try to align everything we did to that. The idea was that if I could bring that advantage to you, we would all benefit from the massive gaming traffic that goes through Steam. I replaced many of our community features with Steam-centric equivalents. Our website gallery, videos, and downloads were replaced by the Steam equivalent. To view this content on our website I used the Steam web API to hook into our application ID and retrieve content.

First, when it came to monetization, Steam seems to be a one-trick pony. Try as I could, Steam users just don't buy things through Steam Workshop. Our own sales in the web-based Marketplace are outperforming Steam. 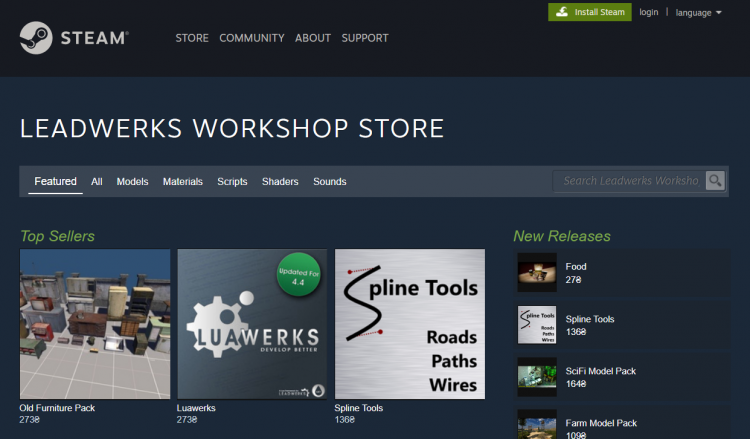 Second, Steam has flooded their marketplace with new titles. This incentivizes competition for digital shelf space. Instead of investing in Steam features for one application ID, it makes more sense to release multiple products on Steam and not tie yourself to one Steam application ID. Valve's position seems to be that you are responsible for driving traffic to your game, but if that is the case why are they still charging 30%? Our situation on Steam is still good, but I am not throwing everything 100% into Steam in the future and I prefer to drive traffic to our store on our own website. 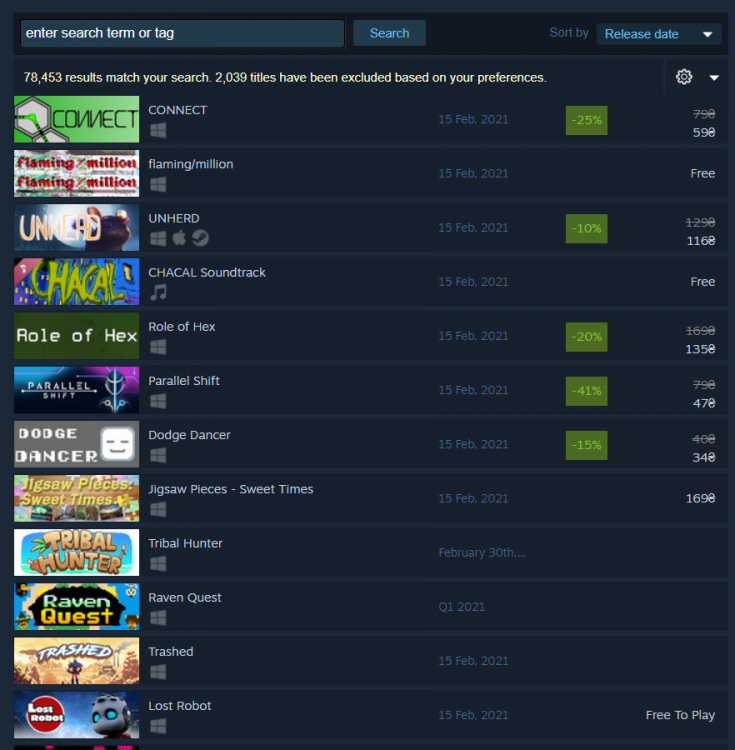 Based on what I have seen, it makes sense to move our center of activity back to our own website. Recent technological advances have made this easier. Cheap file storage backend systems have eliminated the expenses and technical problems of storing large amounts of user data. RSS feed importers have allowed us to hook into the Steam web API to feed all our Steam screenshots and videos into our own system.

We have a new video section on our site. You can paste a YouTube link through our web interface or upload a video file directly. Any videos you publish on Steam will be automatically fed in as well. You will notice in the tutorials section I am now hosting tutorial videos on our own site. They are also uploaded on YouTube, but I am not relying on YouTube anymore for video hosting. 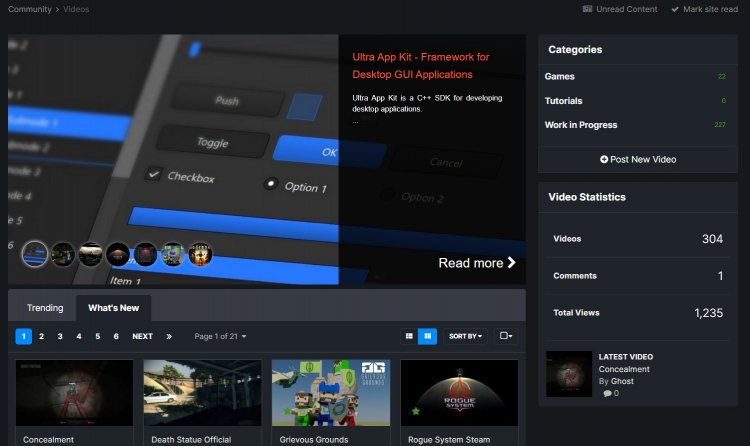 In the future I plan to support user-created paid video tutorials, with the same rules as paid items in the Marketplace.

A new screenshot gallery is up, with images hosted on our own site again. I hope to find a way to migrate all our content on Steam into this system, like we did with videos. I also want to bulk upload all our old screenshots from before Steam.

The Steam-based gallery and videos can still be viewed on the leadwerks.com website, as well as the Leadwerks documentation.

The Marketplace we have now is a 2.0 version of our original system before Steam, with a new Games category. Back in the days before Steam it always amazed me that Furious Frank had over 20,000 downloads. This was from the days before itch.io and gamejolt, and there was a big appetite for indie games. The Games database of our website never reached that level, and I think the reason was that we should have focused on the content. If people want to watch videos they will go to the videos section. If people want to download free games they will go to the Games category in the Marketplace. Having a customized page on our website with a lot of information and links all in one place is about as pointless as having a Facebook fan page. There's no reason for it, all it does is slow down the delivery of the actual content. It looks kind of cool, but I think the viewer just wants to get to the content (download the game, watch videos, view screenshots) instead of wading through a lot of custom CSS pages. If you want to drive traffic to your website or to your Steam page, post a video and put links in the description where you want the viewer to go next.

In addition to uploading free games, you can now sell your games in the Marketplace. I have plans to attract a lot of new traffic to the site in 2021, so maybe your games can get more sales at the same time. The same 70/30 split we use for Marketplace assets applies to games.

Furious Frank is starting over from zero and I realize he would have been enjoyed by over 100,000 players had I not pushed our traffic towards Steam so hard.

At a startup event I attended years ago, one of the speakers told me that email was actually their best marketing tool. I was kind of surprised because to me it seemed archaic, but that conversation stuck in my mind. According to conventional wisdom, if you want to get the word out about your product you should crete an Instagram account, upload your images, and then when you invariably get no traffic you should blame yourself because your content sucks. Who is pushing this "conventional wisdom"? It is being pushed by giant tech companies that seek to absorb and monetize all your content, and a network of parasitical "gurus" who want to sell you useless advice and then blame you when it fails. This is not the way online customer acquisition actually works.

I started looking at traffic on our social media accounts and comparing it to email and web traffic, and the results are shocking. Our email newsletters regularly result in 30x more clicks than anything I write on social media. Not only are they failing to bring in an acceptable level of traffic, Twitter and even Steam are actively preventing us from reaching our customers by censoring our content.

Email is the only direct line of communication you have with your own customers. All third-party middlemen have the potential to abuse their position. They will flood their marketplace with products, change their algorithms, arbitrarily censor or shadowban content. The only thing that will provide a counterweight to that abuse is a good BATNA. If you don't have that you can expect to be treated badly. (It's really a miracle that email was invented early enough to become a common open standard. This would never happen today. "Blue Sky" is probably a sabotage effort.)

In that light, the advice I got makes a lot of sense. Once I realized this I stopped posting on Facebook and Twitter and just left a pinned message directing people to the mailing list: 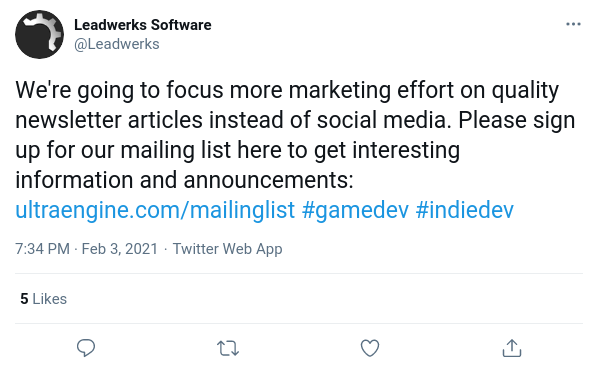 Instead of wasting time shouting into the wind on (anti)social media I am going to instead focus on writing quality articles that will be posted on our site and sent out to the email list.

Valve has made it clear that game developers should not rely on Steam alone to drive traffic to their game. Okay, well if I am responsible for bringing in traffic, I am going to direct it to my own store, not to Steam.

The MBA in me realizes two things:

These two steps are serious hurdles to overcome for any web store. Now that I am selling Ultra App Kit directly on our own site, I have seen an increase in sales of items in our Marketplace. This is not a coincidence. People buy one thing and then it becomes a habit. A subscription option will be available for future software products. All new software I release is going to require an initial sign-in to your forum account. We have tens of thousands of users on Steam that I have no email addresses for or ability to contact, and that is not going to work going forward. (I will make sure an override is built into the software that can be activated by a dead man switch.) 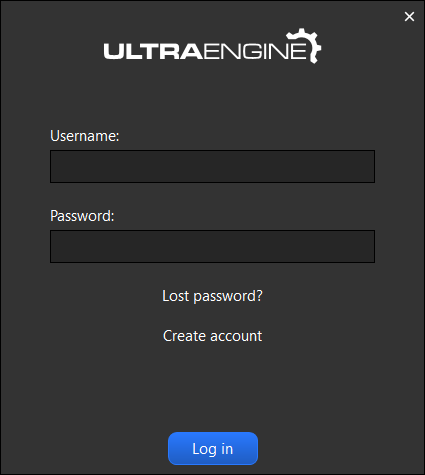 This system gives me the ability to offer software products under a subscription model for the first time ever. This is preferable from my point of view, but I understand it's not for everyone and a conventional software license will also be available.

We also have an automated system to send out Steam keys, so I am now able to sell Steam keys directly in our store. When you order you will receive an email with a link to retrieve your key. Once you enter the key in Steam it is added to your Steam account just as if you bought it on Steam.

To make payments easier we are now accepting PayPal and cryptocurrency payments, in addition to credit cards.

(Valve clearly recognizes a problem with visibility on Steam and is desperately trying to convince you to stay engaged in their system so they can take their 30%. I don't mean to say they are bad guys, I am just saying in any partnership both parties will have some divergent interests and must stick up for themselves. The day that mine is the only company selling products on Steam is when I will consider going Steam-exclusive again. What indie developers should be doing right now is selling their own games on their own websites, in addition to third-party stores like Steam.)

Breaking off the GUI features of the new engine and releasing it early as the standalone product Ultra App Kit was a great idea because it allows me to implement all these things early, test them out, and ensures a smoother release of the finished 3D engine later this year. The basic theme we see here is that these social and gaming platforms are no longer doing their job effectively and we must build something of our own. Withdrawing our content from them and building up our own website only makes sense if there is a way to drive more traffic here. If Steam is flooded and social media is saturated, how can we attract traffic? Email is good for engaging customers you have already made contact with, but how do you attract new people in large numbers? I have an answer to that, but it really deserves a whole article itself.

Here is where we were before:

Here is where we are now:

I hope I have shown how all these changes were not just random decisions I made, but are part of a "holistic" strategy, for lack of a better word.