A new update is available to beta testers.

I updated the project to the latest Visual Studio 16.6.2 and adjusted some settings. Build speeds are massively improved. A full rebuild of your game in release mode will now take less than ten seconds. A normal debug build, where just your game code changes, will take about two seconds. (I found that "Whole program optimization" completely does not work in the latest VS and when I disabled it everything was much faster. Plus there's the precompiled header I added a while back.)

Delayed DLL loading is enabled. This makes it so the engine only loads DLLs when they are needed. If they aren't used by your application, they don't have to be included. If you are not making a VR game, you do not need to include the OpenVR DLL. You can create a small utility application that requires no DLLs in as little as 500 kilobytes. It was also found that the dContainers lib from Newton Dynamics is not actually needed, although the corresponding DLLs are (if your application uses physics).

A bug in Visual Studio was found that requires all release builds add the setting "/OPT:NOREF,NOICF,NOLBR" in the linker options:
https://github.com/ThePhD/sol2/issues/900

A new StringObject class derived from both the WString and Object classes is added. This allows the FileSystemWatcher to store the file path in the event source member when an event occurs. A file rename event will store the old file name in the event.extra member.

The Entity::Pick syntax is changes slightly, removing the X and Y components for the vector projected in front of the entity. See the new documentation for details.

The API is being finalized and the new docs system has a lot of finished C++ pages. There's a lot of new stuff documented in there like message dialogs, file and folder request dialogs, world statistics, etc. The Buffer class (which replaces the LE4 "Bank" class) is official and documented. The GUI class has been renamed to "Interface".

Documentation has been organized by area of functionality instead of class hierarchy. It feels more intuitive to me this way. 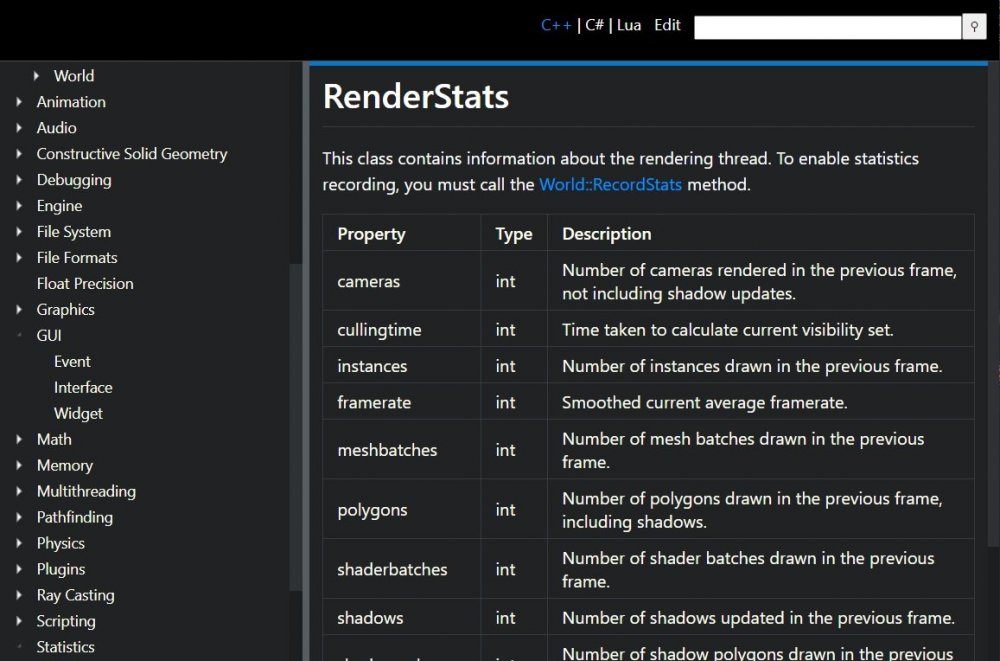 I've also made progress using SWIG to make a wrapper for the C# programming language, with the help of @klepto2 and @carlb. It's not ready to use yet, but the feature has gone from "unknown" to "okay, this can be done". (Although SWIG also supports Lua, I think Sol2 is better suited for this purpose.)