First, I was experiencing some crashes due to race conditions. These are very very bad, and very hard to track down. The problems were being caused by reuse of thread returned objects. Basically, a thread performs some tasks, returns an object with all the processed data, and then once the parent thread is done with that data it is returned to a pool of objects available for the thread to use. This is pretty complicated, and I found that when I switched to just creating a new return object each time the thread runs, the speed was the same as before. So the system is nice and stable now. I tend to be very careful about sharing data between threads and only doing it in a prescribed manner (through a command buffer and using separate objects) and I will continue to use this approach.

Second, I added a built-in mouselook mode for cameras. You can call Camera::SetFreeLook(true) and get a automatic mouse controls that make the camera look around. I am not doing this to make things easier, I am doing it because it allows fast snappy mouse looking even if your game is running at a lower frequency. So you can run your game at 30 hz, giving you 33 milliseconds for all your game code to complete, but it will feel like 60+ hz because the mouse will update in the rendering thread, which is running at a faster speed. The same idea will be used to eliminate head movement latency in VR.

Finally, I switched the instance indexes that are uploaded to the GPU from integers to 16-bit unsigned shorts. You can still have up to 131072 instances of a single object, because the engine will store instances above and below 65536 in two separate batches, and then send an integer to the shader to add to the instance index. Again, this is an example of a hard limit I am putting in place in order to make a more structured and faster performing engine, but it seems like the constraints I am setting so far are unlikely to even be noticed.

Animation is working great, and performance is just as fast as before I started adding it, so things are looking good. Here's a funny picture of me trying to add things to the renderer to slow it down and failing 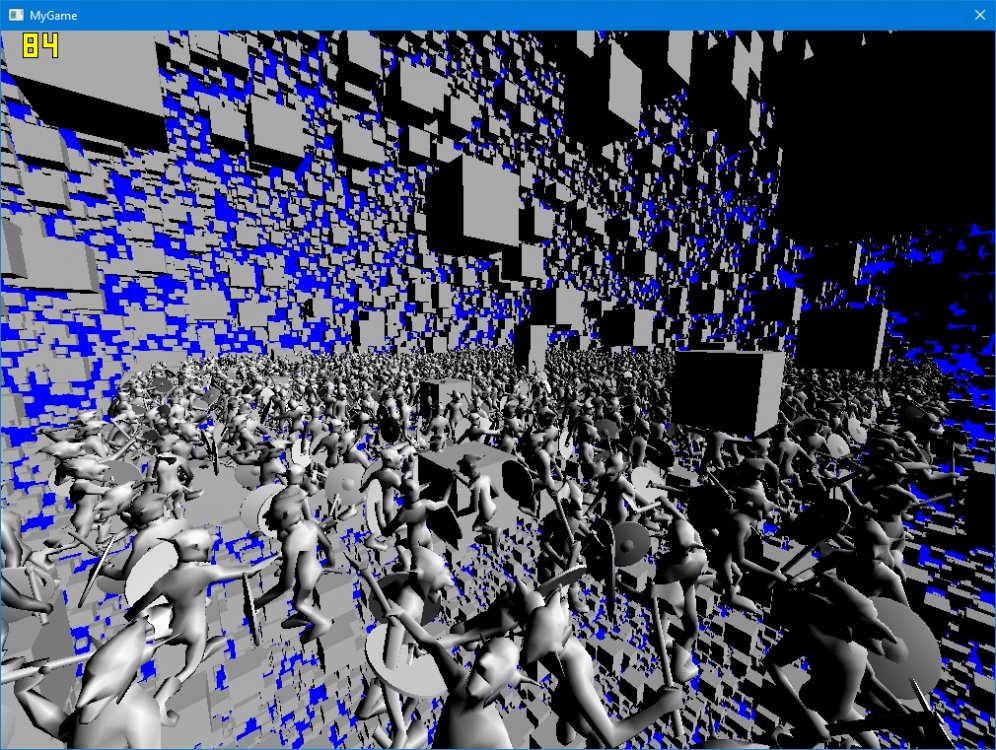 I'm not sure what I will tackle next. I could work on threading the physics and AI, spend some time exploring new graphics options, or implement lighting so that we have a basic usable version of Leadwerks 5 for indoors games. What would you like to see next in the Leadwerks Game Engine 5 Alpha?