Leadwerks Game Engine 4.2 is now available on Steam. This update adds new features to make game development easier than ever. The free update goes out today to over 10,000 paid users on Steam.

Version 4.2 integrates analytics into Leadwerks games with a free gameanalytics.com account. This allows developers to view statistics on player behavior and identify any trouble spots their game might have as players progress through levels. By viewing a summary of all player behavior, developers can make data-driven decisions and get real-time information instead of relying solely on written feedback.

New graphical features make Leadwerks games more beautiful, including fast ray-traced reflections with a new post-processing effect called screen-space reflection (SSR). Easy heat haze, glass refraction, and soft particles can now be added to games just by dragging a prefab into the scene. Textures can now be added to spotlights to project an image onto walls. 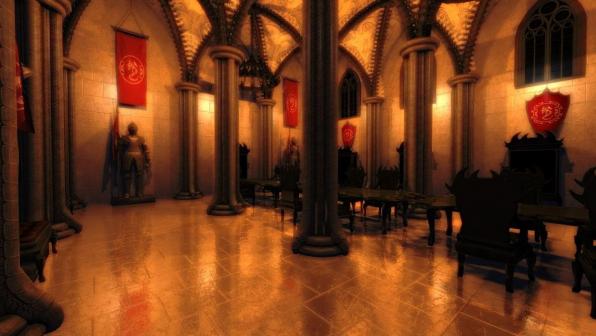 New animation commands and a built-in animation management system make it easier to display game characters with fluid movements. Just set the sequence to play, add a transition time, and the engine will auto matically manage and play a queue of blended animations. A bug that sometimes caused animated characters to render incorrectly on Linux has also been fixed.

It's now easier to purchase items in the Leadwerks Workshop Store. Clicking on the buy button in the editor will open the selected item in the Steam client, instead of requiring you to log into the Steam website through a web browser.

The professional edition has been upgraded to Visual Studio 2015, and is now compatible with the latest version of GCC with C++11 support.

The Leadwerks Winter Games Tournament is running until January 15th, and there’s still time to create a mini-game and publish to Steam Workshop. All participants receive a prize, including stickers, posters, shirts, hoodies, and even Steam controllers.

Leadwerks Game Engine and the Professional Edition DLC are both on sale during the Steam Winter Sale with an 80% discount. Leadwerks Game Launcher can be downloaded for free on Steam.

Leadwerks Software was founded in 2006 to make game development easy and fun. The company launched Leadwerks Game Engine on Steam in January 2014 and has experienced steady growth with over 10,000 paid users. Leadwerks Game Launcher was released as an early access title in September 2015, allowing developers to publish games to Steam Workshop for free, with no waiting period and no approval process.