As discussed before, sales in the Workshop Store have been measly compared to what the DLCs regularly do. People just don't want to use it. Without revenue coming in, I can't convince third parties that it is a good idea to sell through this system (it isn't), and no new products will get added. We need a large library of content to be available for use in Leadwerks, but this isn't working. So I am moving on to another approach.

The "Workshop" menu item in the website header has been placed under the "Community" menu where it is less prominent. Any products you purchased through the Workshop Store will remain available, forever. The Workshop will continue to be a place for the community to share files.

I considered associating DLC purchases with Workshop items so that the two systems were merged, at least from the user's perspective, but decided against it, for now. Discovery takes place in the Steam Store, not the Workshop interface, and there are more important issues to tackle first. I may tie these together in the future so that installing a DLC goes through the Workshop interface. What we need right now is to have lots of content available, and to make sure that content is selling so that more will be added. If that isn't happening, nothing else matters.

A new update adds a tab in the Workshop window titled "DLC". This is where all your purchased DLCs will be listed, and this is how they can be installed to your project. 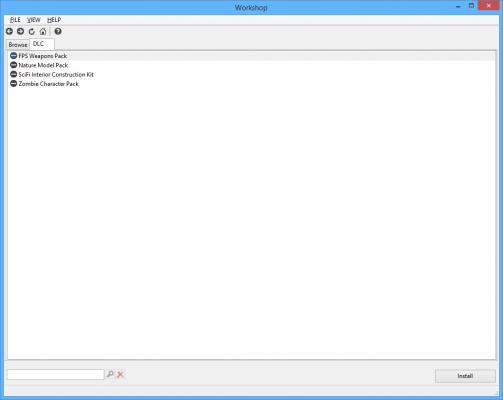 Okay, so monetizing the Workshop failed, and I am calling it now. Now what?

At the same time the Workshop was struggling, our DLC sales of model packs have been very, very good. In fact, the DLCs will regularly sell more in a single day than the Workshop Store has done during its entire three month existence. It's clear that one approach works and the other does not.

What I don't like about DLCs is they require more oversight by me, they can really only be sold in packs, and not individual models, the quality control and standards have to be higher and thus more limiting, and there is a limited amount of store space available to show them. Any revenue splits I do have to be calculated manually, and me doing that myself each month just isn't an option. On Monday I am meeting with an accounting firm so that they can handle this task for me each month. I plan to start releasing third-party model packs as DLCs, where they will actually get sales, and I will outsource the handling of royalty payments so I don't have to deal with it.

This didn't work out the way I planned, but the fact remains we have a method of selling content that works and provides sales for third parties comparable to the other model stores they sell content through. We just need to recognize our own unique strengths and play to them instead of fighting what the user wants.