The Leadwerks 2 vegetation system used a grid of "cells" that each contained a quantity of vegetation instances. If the cell was close enough, each instance was checked against the camera frustum like a regular entity and then all visible instances were rendered in a batch. Cells that were further away were collapsed into a single surface consisting of a quad for each instance. This is how we were able to draw massive amounts of foliage in the distance at a fast framerate:

This was good, but limited by the scene management performed by the CPU. It also used very large amounts of memory to store all the 4x4 matrices of the individual instances. The above map used about half a gigabyte of data to store all positions for each tree int he scene.

The Leadwerks 3 vegetation system is being designed around modern hardware capabilities, taking advantage of the features of OpenGL 4. This has two goals:

One of the most interesting things OpenGL 4 supports is transform feedback, which allows you to render data to an arbitrary buffer. This can be combined with a geometry shader to selectively output information in ways a normal render-to-texture can't. This schematic from RasterGrid's OpenGL blog shows how the system works: 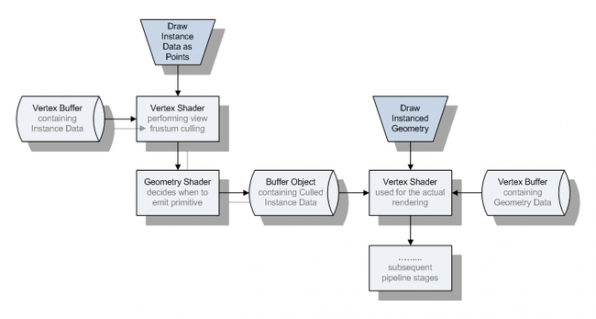 Below you can see my implementation working. The scene consists of 91 million polygons, with about 28 million visible at any given time. (This number will be reduced through the use of billboards.) The edges of the camera frustum are pulled in to make the culling visible.

Use of the transform feedback feature in OpenGL 4 relieves the CPU from the expensive overhead of large-scale scene management.

The need for individual instance matrices is being totally eliminated by using a tiling grid of 4x4 matrices. This creates a repeating pattern of rotations across the scene. I think when the trees are placed on a hilly terrain the tiling appearance won't be visible, but there are other tricks I can use to increase the randomness. The physics system will work by dynamically retrieving the relevant 4x4 matrices of nearby instances, totally eliminating the need to store any of this massive data in memory. The fact that no instance data is being sent over the PCIE bridge also means this system will be much faster than Leadwerks 2.

Vegetation in Leadwerks 3 will be a virtually zero-overhead system and allow for much greater volumes of geometry than Leadwerks 2 could render, at effectively no cost on most hardware.