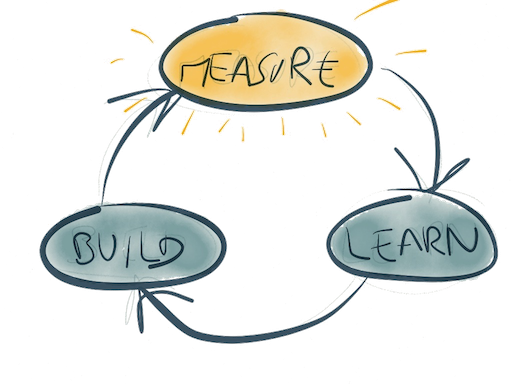 The lean startup methodology posits that life is to short to build a product no one wants. The old way of doing business involved a limited number of companies with very high barriers to entry adopting a "push" strategy. Sears could effectively create demand for a product by choosing what they wanted to feature prominently in their mail-order catalog. Television advertisers could craft a promotional strategy that would reliably result in a certain response. Those days are over, fortunately, but the old way of thinking is still with us.

Today consumers have more choices than ever before. The low cost of internet hosting has led to a long tail of diverse products. In gaming, marketplaces like Steam and mobile app stores have allowed indie game developers to specialize in various niches and deliver value to customers that would otherwise go unserved. This is really awesome, but the old "push" methodology isn't going to work here.

The best approach to succeed in this new multifaceted market is to test markets. This consists of three steps:

Leadwerks Software used this method to identify the Linux market segment. I did not know if a Linux product would be successful, so I put up a Kickstarter campaign and received affirmation from the market. Making Leadwerks run on Linux was a lot of work. I didn't want to do all that, just to find out that nobody wanted it. So testing the market gave me enough of a response I was confident to go forward with the project. The idea is that it's easier to get feedback and change direction early than to build a full product based on a lot of wrong assumptions about what the customer wanted. So you actually want to sell a product that doesn't exist yet. If people won't buy it, it saves you the trouble of making the thing and having it fail.

As a PC developer, the best tool you have to test the market is Steam Greenlight. You can post a Greenlight Concept well in advance of actually writing any code and get a feel for how people respond to your ideas. It doesn't cost anything, and will help you gather feedback and build a fan base early on.

ScrotieFlapWack, Digman, and Rick are using this approach to promote their game Phobia on Steam early on. At this point all we've seen are a menu video, some prototype gameplay, and a few early artwork pieces. But what's important is they're establishing a concept...which is exactly what Greenlight Concepts are for.

franck22000 is a bit further ahead in the game, but he's still taking care to establish a fan base before his final release. Dangerous Rays has been released in alpha form and he's getting feedback from his users long before publishing the final release.

Menu screens are a great way to communicate the concept of a game. They usually include music, a logo, and a background scene that communicates the environment of a game. Without knowing any of the details, you can instantly envision a vague idea of what the final game might be like. I picture Phobia as being sort of like the Amnesia series in a modern industrial setting:

I picture Contained as being an action shooter that's a cross between Killing Floor and Doom 3:

The intent of the authors was probably a little different from my interpretation, but that doesn't matter. I saw enough to be inspired. And when people are inspired by your idea, a funny thing happens. Suddenly you will find that they want to join your team and help bring your idea to reality. So a concept can help you rally a team of people to help.

If you have a compelling idea of the game you want to make, it pays to start your marketing early. By posting a Greenlight Concept early on, you will save time, attract talented people who want to help, and establish a user base that loves what you're doing. Life is too short to build a game nobody wants.