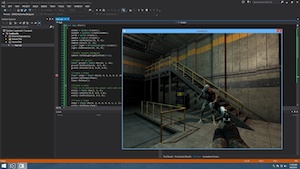 C++ is the game industry’s leading programming language, due in large part to its superior performance and flexibility. However, the language is sometimes considered to be too complicated for indie developers to take advantage of. Leadwerks solves this problem by focusing on a useful subset of the C++ language, and providing a simple command library that works the same in C++ and Lua. This makes C++ game development fast and easy to control.

Adding C++ support to Leadwerks Game Engine unlocks access to a massive amount of free third-party game libraries, which are typically written for C++. Indie game developers can include new libraries for physics, AI, and virtual reality into their Leadwerks projects without having to wait for the developers to add an official bridge. This lets indie developers take advantage of the newest technologies and provides a degree of control other languages can’t match.

Leadwerks is designed to make game development easy for Steam’s 75 million users. A new renderer built on OpenGL 4.0 provides advanced graphics at an affordable price. Built-in level design tools make map design easy for users who don’t happen to be expert artists. Game code can be written with Lua, an easy-to-learn script language, or modern C++11. Finally, the royalty-free license means game developers can publish commercial games and keep 100% of the profits, with no additional payments due, ever.

The Leadwerks Game Engine: Standard Edition DLC can be purchased on Steam for $99.

Leadwerks Software was founded in 2006 to build game development tools that are powerful and easy to use. The company launched Leadwerks 3, their first multiplatform product, at GDC 2013. Last summer, the company conducted a successful Kickstarter campaign to being Leadwerks to the Linux operating system, reaching over 200% of their goal in just six weeks. A concurrent Greenlight campaign for Steam was also successful, making Leadwerks the first 3D game engine approved for distribution on Steam.